NZ 1, playing in division 1, took on last year’s  finalists NSW in their first match of the Over 60s tournament in Adelaide 3 November.  The match was played at the Marion Sports Club ground. NZ captain John Cushen won the toss and chose to bat first. The NZ side we’re under pressure early, finding runs hard to come by and losing wickets regularly. At 51 for 6 in the 22nd over,  they looked to be out of contention. Andrew Nuttall (40) and Bevan Guthrie (43 not out) then dug in for an invaluable 78 run partnership for the 7th wicket to bring their side back into the match. While the final total of 142 for 7 from the 45 overs was disappointing, it was a vast improvement on what had looked likely and at least gave the bowlers something to defend. In the end, NSW reached their target with just one over to spare and 5 wickets down. While fielding lapses proved costly for NZ, the bowlers performed well. Nuttall was the star, with 2 for 7 from his 8 overs. Cushen took 1 for 30, Hamish Wright 1 for 21 and Danny Langrope 1 for 25.

A damp track meant a delayed start and NZ 1 were asked to take first use in what proved to be difficult conditions. Wickets fell, runs were hard to come by, and at 3 for 20 after 10, it once again looked to be an uphill battle for the Kiwis. Cliff King and Gary Rudolph dug in, adding 32 for the 4th wicket before King went for 33. Paul Facoory joined Rudolph in a 36 run 5th wicket stand before Facoory went for 11, with the total at 88. Andrew Nuttall (33) and Rudolph (35) brought up the 100 and with valuable later contributions from Bevan Guthrie (12) and Hamish Wright (18 from 8 deliveries), NZ 1 scrambled their way to 166 for 8 from their 45 overs. A disappointing total but a commendable recovery considering the adverse batting conditions. The pitch had settled by this stage and WA were obviously going to find batting easier. However, the NZ 1 bowling line-up applied early pressure and, combined with a much-improved fielding display from that seen on day 1, held WA to 4 for 55 at the half-way point. The match see-sawed from this point on and came down to WA requiring 25 from the final 2 overs for the win, 3 wickets in hand. Graeme Inglis conceded 9 from the 44th and NZ 1 captain John Cushen needed to keep the opposition to less than 15 for his side to win the match. A boundary 4 was hit from the first ball and when the 3rd sailed over the fence for 6, 5 were needed for a tie, 6 for a win. Cushen held his nerve, the last 3 balls going for a single, a 2 and another single. NZ 1 gaining a 1 run victory and keeping alive their slim chances of reaching the final.

Victoria won the toss and elected to bat first on a track that had been covered overnight so was not affected by the heavy rain that fell early morning. The match started on time and the NZ 2 bowlers continued their good form from the previous day. Spinner Kevin Goldsbury, in particular, was very effective. He bowled his 7 overs straight through, conceding just 17 runs. Murray Brown picked up a wicket in his first over, the score at 35, but Victoria got through to 106 before a 2nd wicket fell. The run-rate never exceeded 3.5 an over at any stage however and at the end of the 40 overs the Australian team had totalled just 138 for 6. Tony Gray was the most successful NZ 2 bowler, taking 3 for 31 from his 7 overs. Brown took 1 for 2 from his 3 overs, before leaving the field with injury. Gordon Kuggeleijn claimed 1 for 10 from 3 overs and Bob Masefield 1 for 21 from his 7. Another outstanding opening partnership from Kuggeleijn and Rod Smith set NZ 2 on the path to another comfortable victory, running between the wickets very well and scoring 76 to follow their 73 partnership from the previous day. Losing wickets at 112 and 116, NZ 2 reached their target in the 33rd over, at 140 for 2. Both openers retired on 42. Lindsey Hewitson made 10, Jeremy Wilson was 17 not out and Goldsbury 15 not out. With the lowest ranked NSW Boomers to play on Wednesday, NZ 2 look ‘odds on’ to qualify for Thursday’s Div 3 final.


Playing in division 3, NZ 2 beat ACT Galaxies 2 by 49 runs, in their 1st match of the Australian Veterans Over 60 tournament in Adelaide. NZ2 captain Garry Webb won the toss and elected to bat in sunny but cool conditions at the Para Hills Cricket Club ground in Northern Adelaide. An opening partnership of 73 between Rod Smith (41 retired) and Gordon Kuggeleijn (38), gave the NZ team the base for a very competitive 195 for 7 total from their 40 overs. The outstanding contribution however came from Northern District’s Rob Craig, batting at no. 5. He hit 4 sixes and 2 fours in his 45 retired, from just 33 balls. Hugh Wright scored 15, Bob Masefield 17 and Lindsey Hewitson 12. The NZ2 bowlers, very well managed by captain Webb, made scoring difficult for the ACT side from the outset and the result was never in doubt, the Australian team restricted to 146 for 7. Bob Masefield took 2 for 28 from his 6 overs, Kevin Goldsbury 1 for 19 from 7, Craig Gray 1 for 14 for 7 ( including 2 maiden overs) and Tony Gray 1 for 12 from 7. 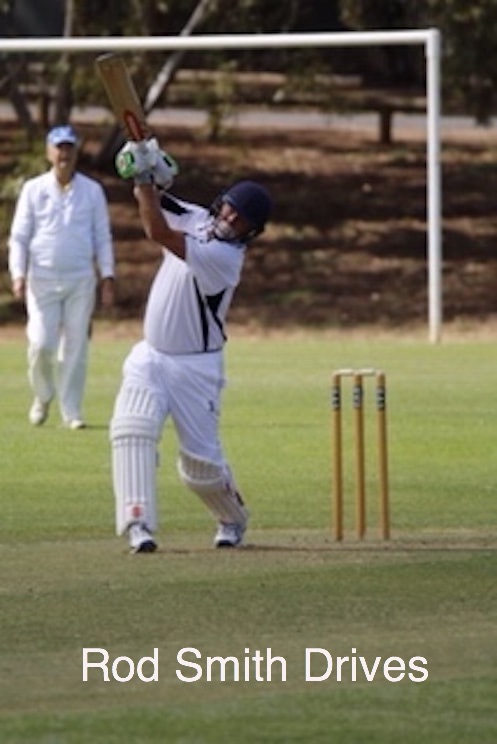